The Masseria of San Francesco al Bradano once stood where the artificial lake of San Giuliano lies now. Founded in the 17th century by Franciscan monks along the Bradano river valley, it was later acquired by my great-great-grandfather Pietro Giura Longo in the second half of the nineteenth century, when many of the clerical goods of so-called Manomorta were sold. At that time the Masseria included a much larger territory than the present one. The farm then went to his son, my great-grandfather Tommaso Giura Longo, and from him to my grandfather Pietro. In the 1950s, after the Second World War, the Bradano and Metaponto Consorzio di Bonifica decided to create the artificial lake of the San Giuliano Dam along the River Bradano. It was then that my grandfather Pietro Giura Longo was expropriated  much of the land, including the hectares in which the Old Masseria was built, and the Chapel, which had been of the monks of St. Francis. 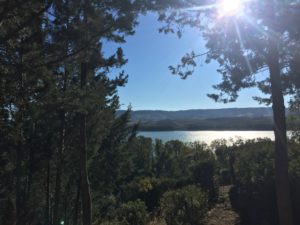 The present farm, renamed Tenuta Donna Maria, in honor of my grandmother Maria Sarra, wife of Pietro Giura Longo, from whom I myself take my name, was built by my grandfather in the 1950s. It originally included a sheep barn, which is currently the farm center, and a cottage for the homes of workers and laborers with their families, where the guest rooms are currently located. There was also a silo for the conservation of fodder, and a barn for cows and calves, where currently the kitchen and restaurant of the agriturismo are located. The silo has remained as it is, symbol and memory of those times. Finally, the chicken house has been transformed into accommodation for staff, and other warehouses and stores in the yoga/conference room and spa.

Maria Giura Longo, Mariella for my friends, it’s me, the current owner. I inherited the farm from my father Raffaele, called Lello. He was also an illustrious citizen of Matera, but whose interests were outside the agricultural ones. Historian and politician, author of numerous texts on the history of Matera and Basilicata and beyond, he was Associate Professor of History of the Risorgimento at the University of Bari, and a Member of the Italian Parliament from 1976 to 1987, elected first as an independent of the left and then as a member of the communist party. He loved this land and the farm, and although he did not have much time to devote to it, he transmitted that love to me so much that I decided to return to Italy from England, where I was living with my two children, and take care of it after his early death, which occurred in March 2009

However, I would like to underline an important discontinuity with respect to the rest of my family, who have taken care of this land for five generations. Not only I am the first woman in the family to run this business, and I have to thank for this the times that have changed. But, and perhaps above all, I am the first of my family to live in the farm and manage it directly, without intermediaries (the so-called ‘massari’ that have so far taken care of the daily running of the company). This is a big challenge for me, and an even bigger satisfaction when I see the results of my work. Even more, it is a dream realized and a passion that I have always had, for nature, for the care of the earth, of the people, and for the well-being of our planet and of all its inhabitants, be they men and women, or animals and plants.

Mariella Giura Longo, owner of Tenuta Donna Maria, holds a BA degree in Political Economy (1987) from Modena University; an MSc in Agricultural Economics from Oxford University (1990) and a PhD in Agricultural Economics and Politics from the Universities of Modena, Ancona and Siena (1992). She worked as researcher at the Centre of Asian Studies of the University of Hong Kong (1995-1998); and as Consultant for INEA (Italian Institute of Agricultural Economics) from 1999 to 2002. She opened the first meditation centre in Matera, her hometown, in 2003, became Reiki Master in 2004 (Usui Method) and Reconnective Healing Practitioner (2010). She attended several trainings in the UK, including “The Transformation” with Darren Eden, in 2014 and 2015. And in 2018 “The Renaissance”, also with Darren Eden, in Matera, Italy. She wrote many essays, including the book “Contadini, mercati e riforme. La piccola produzione di merci in Cina 1842-1996” published by Franco Angeli in Milano (1998). Her two children Vincent and Sandra, respectively 24 and 22, were born from her marriage with Jun Li.

For more information on the history of the Masseria di San Francesco al Bradano, see the articles by G. Gambetta and R. Paolicelli in the magazine “Mathera” vol. 5, 2018, pages 74/92